Russian snuff boxes range in value from the ultra-expensive Faberge boxes to the common 19th century “every man” box.  Hopefully this guide will give you some tips on how to value your specific box.  Feel free to email us directly to ask any questions.

The era of the Russian snuff box really begins in 1678 when Peter the Great imported goldsmiths from countries in Western Europe to come work for him personally.  Several snuff boxes do exist that can be tied to Peter the Great and most of them are held in institutional collections.  Snuff boxes from 1715 to 1740 are occasionally available.  Almost every both from this time period was made by French and German goldsmiths.  Expect to find many precious stones on these boxes.  1741 was the first year that Russian snuff boxes were marked.  This has made the identification and appreciation of boxes from the time of Elizabeth and onwards much easier. 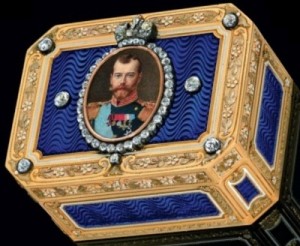 1780 is about the earliest time period for which one would expect to see a silver Russian snuff box.  Silver boxes were made for the middle class.  Despite being old and interesting, they aren’t exceptionally valuable today.  One reason that so many both rare and common Russian snuff boxes exist is thanks to the gift giving nature of the Russian people.  For 100 year or more any important visitor was typically welcomed to the country with a gift.  Small keepsakes have always been a favorite; more often than note the snuff box was the perfect gift. 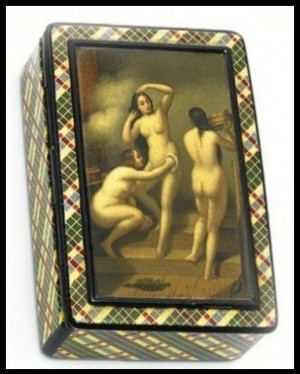 Two of the more common types of Russian snuff boxes are known as niello boxes and lacquered boxes.  Niello boxes can be found at any antique mall or auction on any given day of the week.  They won’t always date to 1700s Russia, but the style will be similar.  Niello boxes are usually available for around a few hundred dollars.  The other more commonly encountered box is the papier-mache constructed lacquer snuff box.  Most lacquer boxes are worth less than $500.  However, if you can find an example that is marked with a particularly interesting scene, then thousands of dollars could be possible. 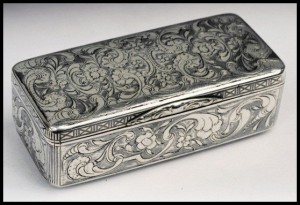 A few important Russian snuff box makers are listed below:

Jeremie Pauzie – He was born in Geneva in 1716.  He moved to Russia in 1729.  Pauzie studied under a French goldsmith known as Gravero.  He was a court appointed goldsmith under Catherine the Great.  Pauzie’s work isn’t marked.  However, it is identifiable based on his use of precious gem stones in his lid scroll work.

Jean-Pierre Ador – He was a Paris goldsmith who arrived in Russia in 1770.  As you might expect, his work has a strong French influence.  He and the artist below are widely considered to have produced the most important Russian imperial snuff boxes.  Most of Ador’s boxes are larger than most.  He has work in the Hermitage and Smithsonian.

Johann Gottlieb Scharff – Schraff was a German goldsmith trained by a German named Goebelt.  His boxes tend to be more oval or round shaped.  He was one of Catherine the Great’s favorite artisans.  Several of Schraff’s snuff boxes are in The Hermitage today.