The exact beginning of the era of the French snuff box is unknown.  This is because there is no clear definition early on of what constituted a snuff box and what was simply a small box meant to store something.  French snuff boxes first become unquestionably identifiable in the early 18th century.  In fact, the stereotypical idea of a snuff box as being highly ornate with gold, jewels, and enamel work is exactly what a French snuff box is.

The golden years of the snuff box starts in France around 1740.  Snuff boxes were of high importance.  Early versions were little more than highly valuable commodities that could trade hands with ease in substitution for cash.  Early examples virtually don’t exist today because as soon as one was received it was broken down for its components and converted to cash.  By 1740 snuff box making was its own industry.  Some goldsmiths exclusively made snuff boxes.  You had to be a part of guild in order to make snuff boxes in France. 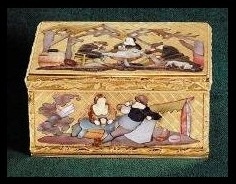 Snuff boxes took a step further in 1745 to include enamel work.  Portraits and floral scenes had been used on previous boxes as early as the mid-1600s.  However, enamel work really exploded with snuff boxes in the 1740s.  Unknown artists painted extremely detailed landscapes or street scenes.  It is a shame that only the goldsmiths are known today, because there was also a lot of talent with the enamellers.

After 1760 the history of the French snuff box moves along like many other countries.  Around 1760 the boxes took on a more classical look with Greek and Roman scrolls and painted scenes.  Lacquered boxes with a central painting were also extremely popular.  The French Revolution really put a damper on snuff boxes.  If you valued your life, then it was a good idea not to carry around statements of wealth. 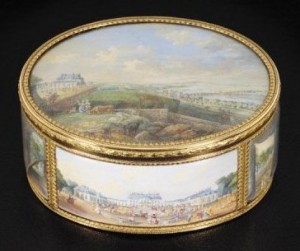 Today French snuff boxes are as popular as ever.  We owe this to two factors.  For one, French snuff boxes were frequently marked.  Two, a surprising number of snuff boxes have survived today.  This makes research and collecting possible.  If you need help with your snuff box, just ask.  We happily share information for free.