Snuffing in German became popular at the same as everywhere else in mainland Europe.  This means that earliest known German boxes are usually made of horn, ivory, or wood.  These were manufactured between 1690 and 1710.  1710 is also the first year in which silver snuff boxes were made in Germany.  The oldest gold snuff box from Germany is from around 1730.  Boxes made of porcelain and papier-mache were also in heavy demand in Germany when snuffing reached its peak in popularity.  The earliest German snuff boxes had a decidedly French feel.  However, in 1740 Frederick the Great made it illegal to import gold or jeweled snuff boxes from France.  Instead of importing the jewels, he imported the jewelers. 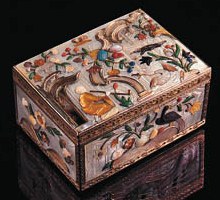 German boxes are especially difficult to date and correctly attribute because the boxes were not marked.  We have to rely purely on anecdotal evidence when dealing with German snuff boxes.  One great thing about mid-18th century boxes is that they took on their own completely unique look.  The antithesis of the German snuff box would be the Dresden gemstone boxes.  The artisans in Dresden had a wealth of gemstones, minerals, and quartz at their disposal.  These were often used to make circular snuff boxes. 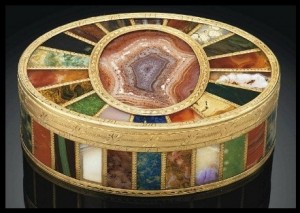 In addition to the easy access to materials, German snuff boxes were also popular in the day because of their main patron, Frederick the Great.  Frederick brought in goldsmiths from all over Europe to help promote the arts.  Many of his imported jewelers made some of the most valuable snuff boxes available today.

It should be mentioned that there were also a number of artisans working in Berlin as well as Dresden.  A few names to remember regarding the snuff boxes of Germany are: