Dutch snuff boxes are rare for a very simple reason.  Very few people in Holland actually used snuff; pipes were heavily favored.  Mainland Europe is a small and transient area, so there were plenty of snuffers in and around Holland.  However, the gold and silversmiths of the day just did not create many snuff boxes.  In fact the earliest Dutch snuff box is nothing more than a watch case with a lid.  It has been dated back to 1667!

The most famous Dutch snuff box maker is known simply by the initials I.S.  His work is featured in several museums, but there is unfortunately nothing else known about the artisan today except that he almost exclusively worked in gold.  Once you get into the 1700’s the Dutch did start to make more recognizable and commercially viable snuff boxes.  Three makers of note are Louis Mestejer, Jean Saint, and Philippe van den Hende.  The craftsmen all have snuff boxes known to exist.  Another maker of note is Willem Wobbe.

An interesting side note is that silver boxes from Holland are actually more difficult to locate than gold boxes.  However, that certainly does not mean that silver is more valuable. 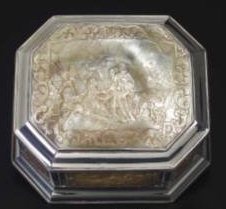